Joseph Rudyard Kipling (1865-1936) – the famous short story writer, novelist and poet who wrote mainly on the British Soldiers in India in one of his famous poems which has become even more relevant in this day and age, talked of the harsh conditions  and the hopelessness a soldier has to face up and when fighting the war in the plains of Afghanistan. 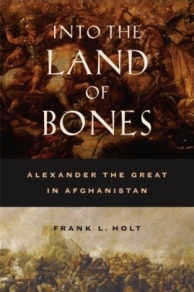 Just to get a feel of what he intended to convey to the future generation, I’ll just reproduce the last part of the poem titled: ‘The Young British Soldier’

When you’re wounded and left on Afghanistan’s plains,

and the women come out to cut up what remains,

jest roll to your rifle and blow out your brains

Kipling hasn’t said anything new about Afghanistan, for as you’ll see Afghanistan doesn’t change much. If Alexander The Great had been alive to see the three Anglo Afghan Wars that the British lost, badly, and of which Kipling saw two, or the boastful Soviets who said they’d bring it to ashes in 3-4 weeks, or the more recent fiascoes committed by the West, he’d have the ‘I told you so’ look on his face for it is said that when Alexander was stationed in Afghanistan nearly 2,300 years ago, during the course of his almost all conquering expedition, he wrote a letter to his mother in which he briefly hinted at the badassitude of the Afghans, his words echoing the inherent fears of Kipling had regarding fighting in Afghanistan:

I am involved in the land of a ‘Leonine’ (lion-like) and brave people, where every foot of the ground is like a wall of steel, confronting my soldier. You have brought only one Alexander into the world, but every mother in this land has brought an Alexander in the world.”

While William Dalrymples’ book titled ‘The Return of a King: The Battle for Afghanistan’ which I have covered here published in late 2012 only explores the vortex of events that Afghanistan was caught in when the British invaded it in the late 1830s and the Britisher’s resultant defeat which later came to be known as the biggest imperial disaster of the dynasty, this book: ‘Into The Land of Bones: Alexander The Great in Afghanistan’ authored by Frank L. Holt actually provides those stories of Anglo Afghan Wars in its introduction!!

And this book came out in 2005. (The.Ijtema® tip: Do not buy W. Dalrymple’s ‘The Return of a King’ if you are buying this book)

What this book does is time travels more than 2300 years into history straight to the times of Alexander The Great and chronicles his defeat at the hands of the Afghans – the British were not the first to taste defeat, nor the first to stand humbled against the raw brute power of their poor but extremely smart-ass foes.

This book confirms the story and how!

Of the few pages I have read, the prose is simple, the narrative superb and the cover of the book which mimics a scene in the middle of a battle, with all the dust that such battles give rise to, typical of a south Asian terrain, typical of a classic battle in south Asia is so on the spot, for covers help book sell, you know. Ask the Japanese the importance of packaging.

This also makes me wonder something related, although not directly, Islam was introduced to Afghanistan I believe during the reign of Caliph Hadrath Umar Bin Abdul Aziz (may Allah subhanahu wa ta’ala have mercy on him) and others which means before that, they were pagans, and if Islam was forced on them, they’d have retaliated like history (and they have retaliated even against the Muslim Arabs, no doubt) proves it so many times over and over again, which means it was not forced on them but they came to accept it whole-heartedly over a period of time, for today Afghanistan is 99% Muslim, so which effort truly conquered their hearts such that they never let go of the truth? I hope you get the hint. Although not denying other efforts did play their part.

Title: Into the Land of Bones: Alexander the Great in Afghanistan

Available from: All major bookstores. 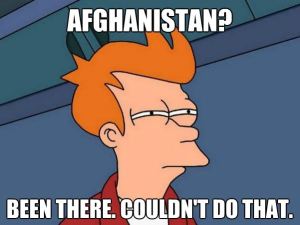 The Russian’s ‘I told you so look’ now stands multiplied.